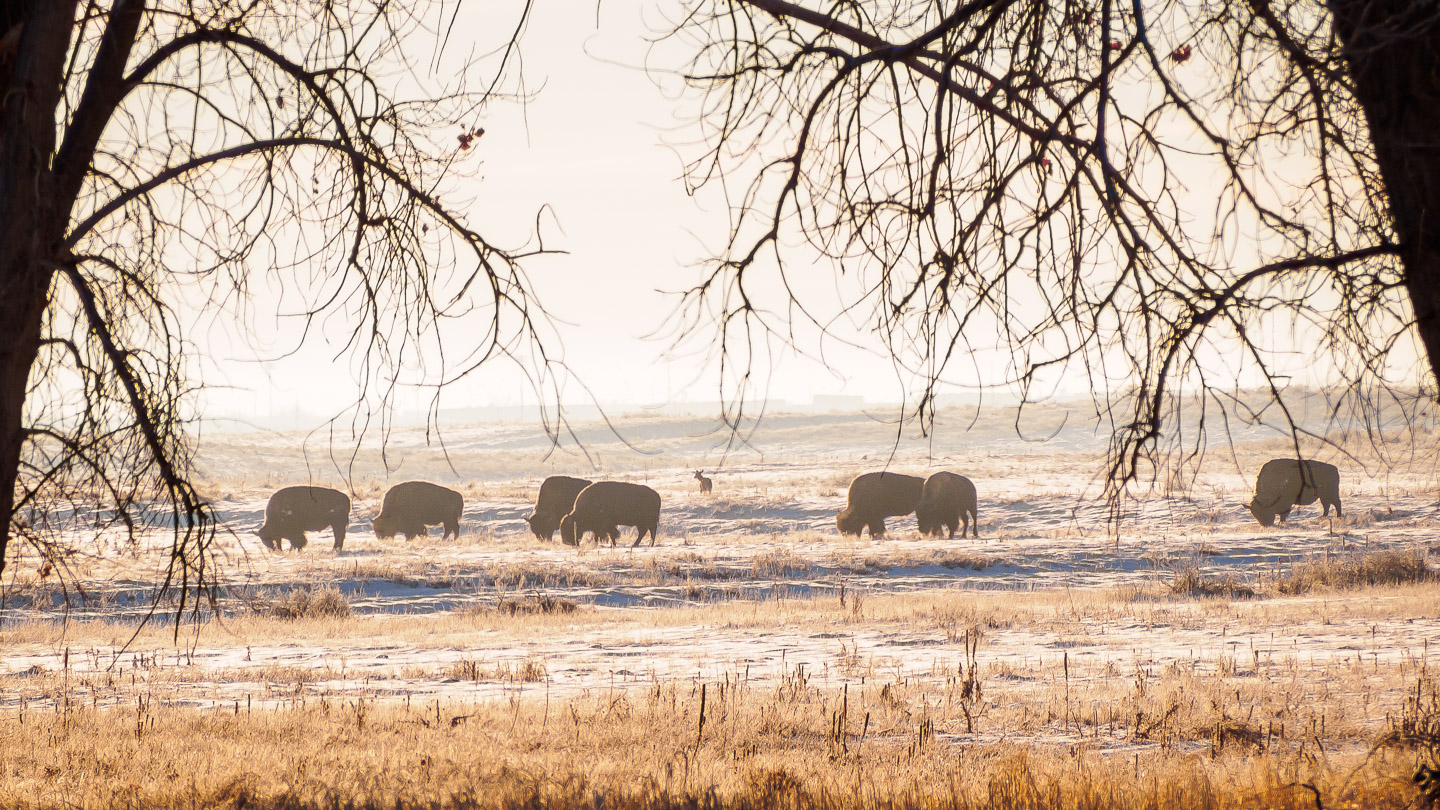 It is hard to turn to any media outlet these days and not be bombarded with two main talking points – politics and climate change. While the two go hand-in-hand and have driven us to a critical junction in human caused activities across a wide variety of topics, I will try my best to stay away from the politicking in this post. Instead, I will focus on an aspect of human caused climate change that many of us can rally around – conservation of natural habitat and ecosystems. And what better way to start discussing this than a romp through a (former) chemical dumping ground. 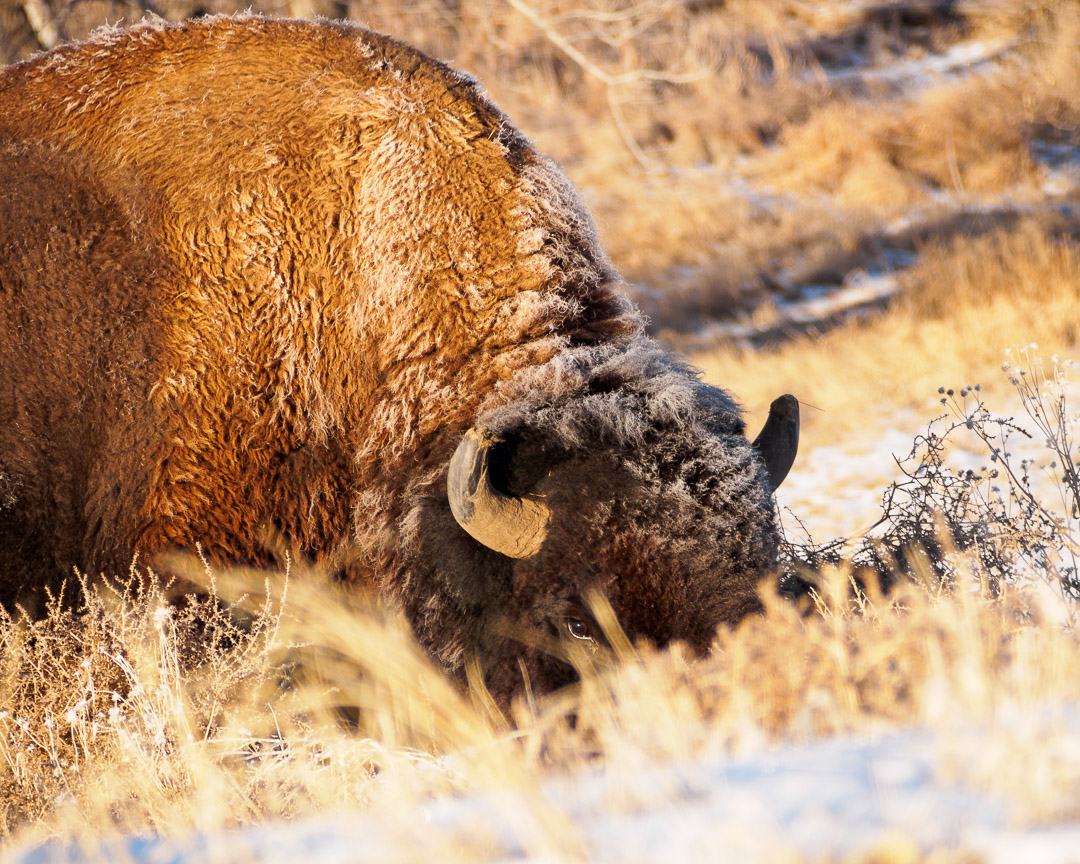 Picturing conservation success in urban environments is hard to image in this day and age. Rocky Mountain Arsenal National Wildlife Refuge (RMA for short) is both a direct result of wartime hubris and a success story of the conservation movement. Less than 10 miles northeast of the city of Denver, Rocky Mountain Arsenal’s past is shrouded in secrecy, creation, destruction, and rehabilitation. It all started back in 1942 to manufacture chemical weapons (hence the arsenal). The land was selected for use due to its proximity to the airport as well as its distance from coastal areas, therefore being less likely to be attacked in the process. Claimed to be a deterrent to war, chemical weapons like napalm, sarin/mustard/chlorine gasses, and white phosphorous were all developed on the 17,000 acres of former farmland just outside of Commerce City. During this time, environmental studies and laws protecting our natural resources were few and far between. Contamination and dumping were rampant, and continued through the mid-1980s as the site was bought and operated by Shell Oil soon after the second world war had ended. 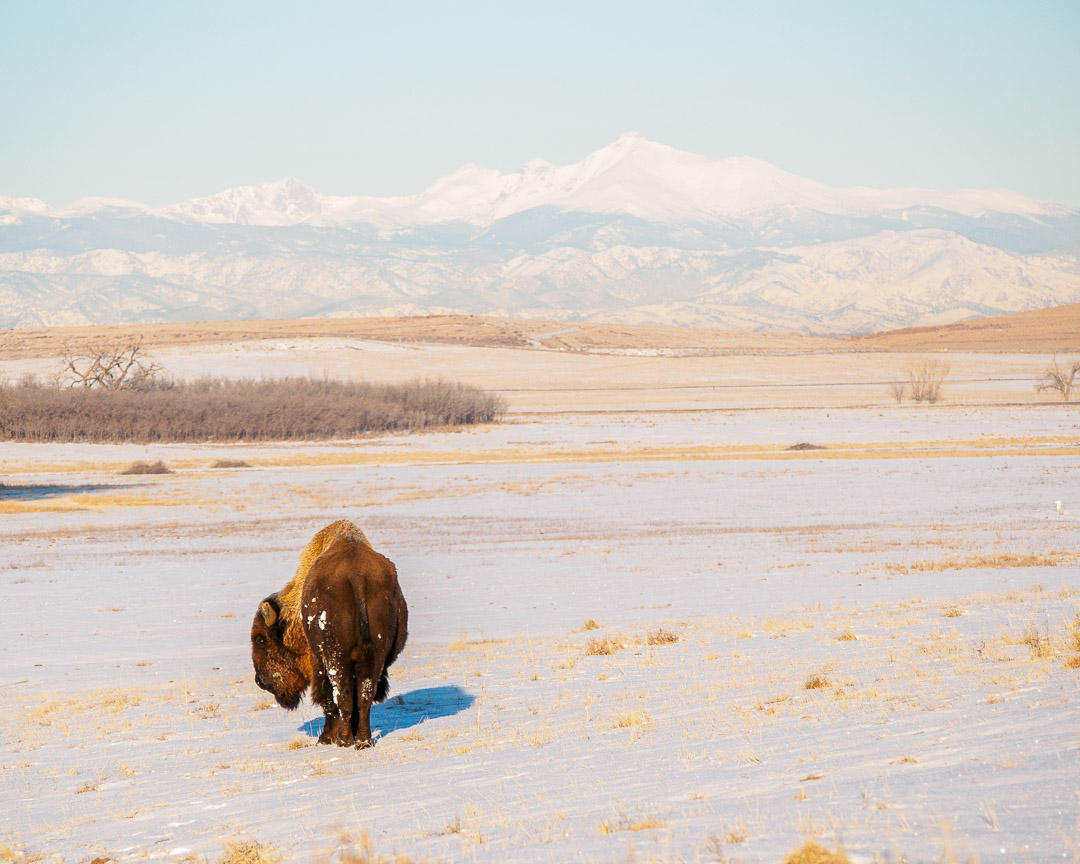 Much of the area’s industrious past is present in today’s landscape. While the refuge has been cleaned up as of 2010 and the buildings of the time dumped into a landfill nearby specific for that cleanup effort, the horizon is dotted with plumes of steam and smoke billowing from smokestacks, and cranes of current era development. But focus your eyes just a bit nearer and you soon realize the treasures within that helped lead to a monumental effort, and resulting success, in environmental cleanup and conservation. It all started with the discovery of a large population of the United States’ symbolic bird, the bald eagle. The 1960s and 1970s were a boon to the conservation movement, and brought to light the impacts human activity was having on animal populations and ecosystems. The Endangered Species Act was developed, and further environmental laws and policies were in their infancies. Back in the 1980s, the discovery of wintering birds in the RMA area lead to more surveys, and people began to realize there were far more than just eagles that dotted the trees around the land. Deer, coyote, prairie dogs, and a variety of avian life found refuge in the open and relatively undeveloped tract of land. Feeling the pressures of encroaching urbanization, the animals ended up thriving in the area despite the vast contamination. As a result, and after some testing of animals that found them to be healthy, Congress passed the Rocky Mountain National Wildlife Refuge Act and designated the site as a refuge to be cleaned up and monitored by the federal government. 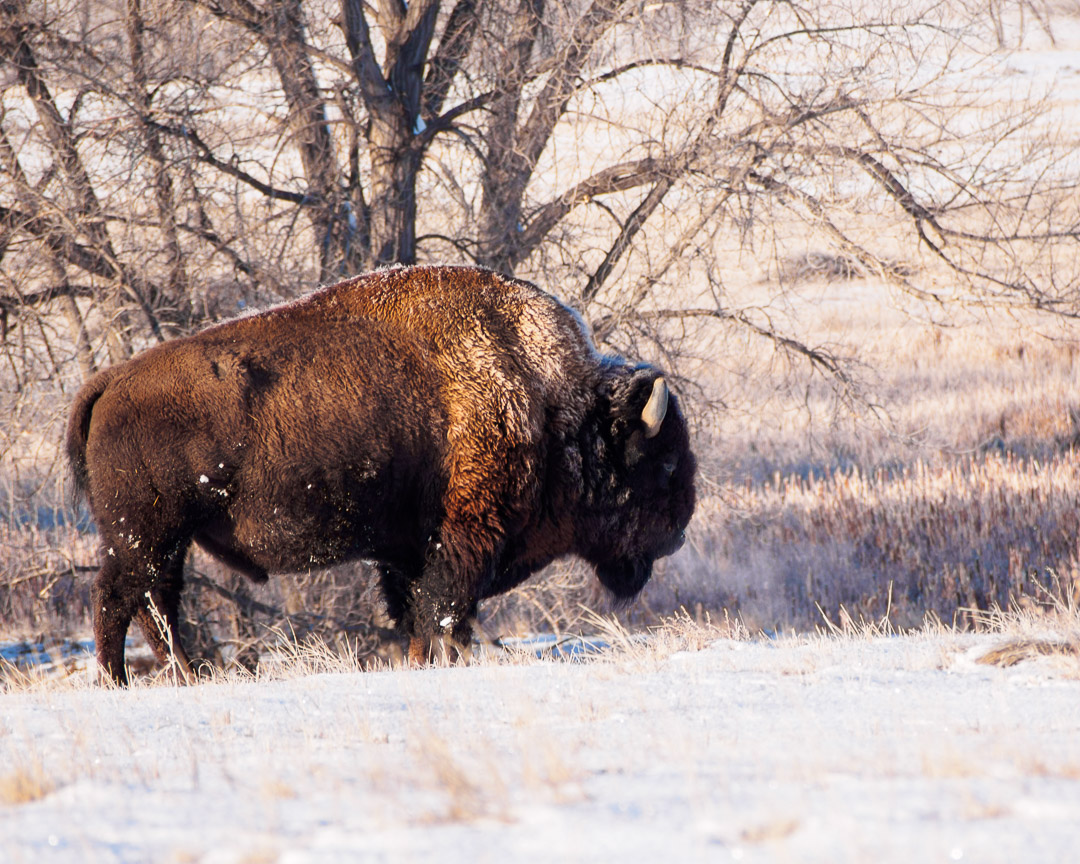 Today, the site is considered clean and safe for visitors in its totality. Gone are the days of thousands of ducks found dead due to dieldrin, and air and water contamination concerns for local area residents (other Denver area pollutants notwithstanding). Now, visitors are welcome to explore the site’s 10 miles long wildlife drive where you’ll pass through a broad swath of the park, able to observe white tail deer and bison from the comfort of your own car. Prairie dog mounds dot the land in all directions, their whistles of communication echoing around you. Bald eagles roost atop trees and surrounding power lines, and hawks float from fence post to distant limbs, flying just over the tall grasses seeking their next meal. Go slow and silent enough and you might notice the deer looking off into the distance, uncaring of the large metal beast before them as they observe something a bit more potentially dangerous – a coyote foraging through the grasses for a rodent or three. As visitors are not allowed to exit their vehicles on the driving portion of the park, a variety of trails are available off of the paved path (and out of the way of the herd of bison introduced in the parks creation). Lakes dot the land, and the paths wind through the prairie, providing you with opportunities to safely observe wildlife. They will see you first, and spirit off a good distance away if you are on foot. But stay still long enough and they might just realize you’re not so bad, and go about their daily routines within a safe observational distance. 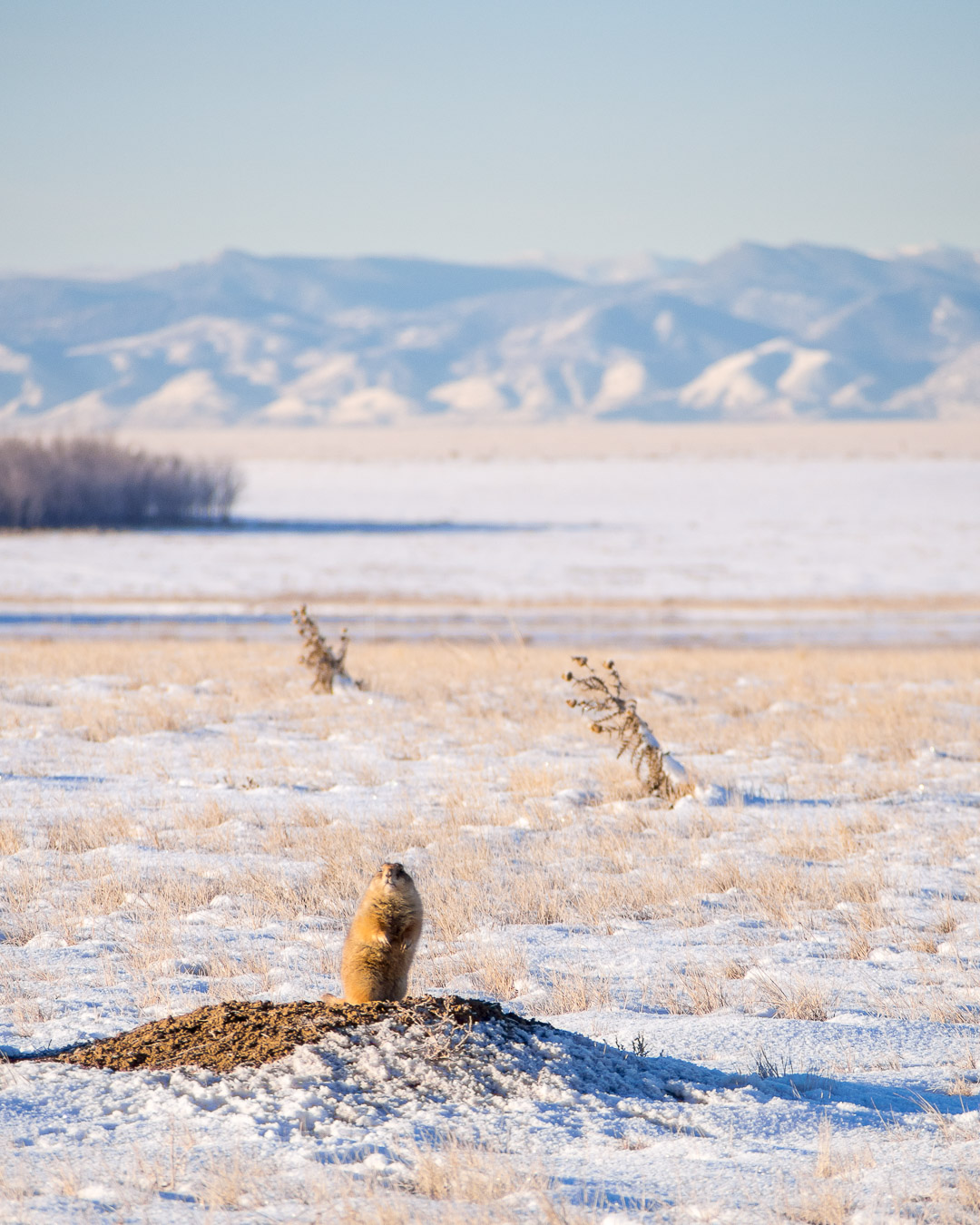 I did not know what to expect out of the Rocky Mountain Arsenal. Hearing of the wildlife drive initially sounded like a gimmick to get people’s hopes up and spend time in the area. The large, granite boulders gently swaying in the distance change your mind immediately. Wait, boulders don’t sway. Past the drooping tree limbs, among the morning haze, bison herds (transplants from Montana) gather and graze while minding their own business. The two bison I got to see eye-to-eye, and the magpie that rode them, alongside the road debunked any notion that the wildlife drive is a marketing ploy. Being able to look a 1,000 pound beast in the eye from 30 feet away made me realize one thing – this was real. Deer lined the road, some basking in the slivers of sunrise, others standing motionless as their ears twitched towards various sounds. Aforementioned prairie dogs chased one another between mounds, while others stood sentinel ready to sound the alarm at the massive hawks that fluttered about. Fellow visitors stop to point their telephoto lenses out of their truck windows, the cold January morning no match for a pristine, undisturbed shot of a buck roaming his kingdom. The one-way drive provides ample berth to be able to stop on the road and just watch a particular point, and revel in the classic Denver skyline painted against the backdrop of the foothills. A reminder of how close you were to the urban landscape, but still able to quickly get absorbed in the natural form of the area. 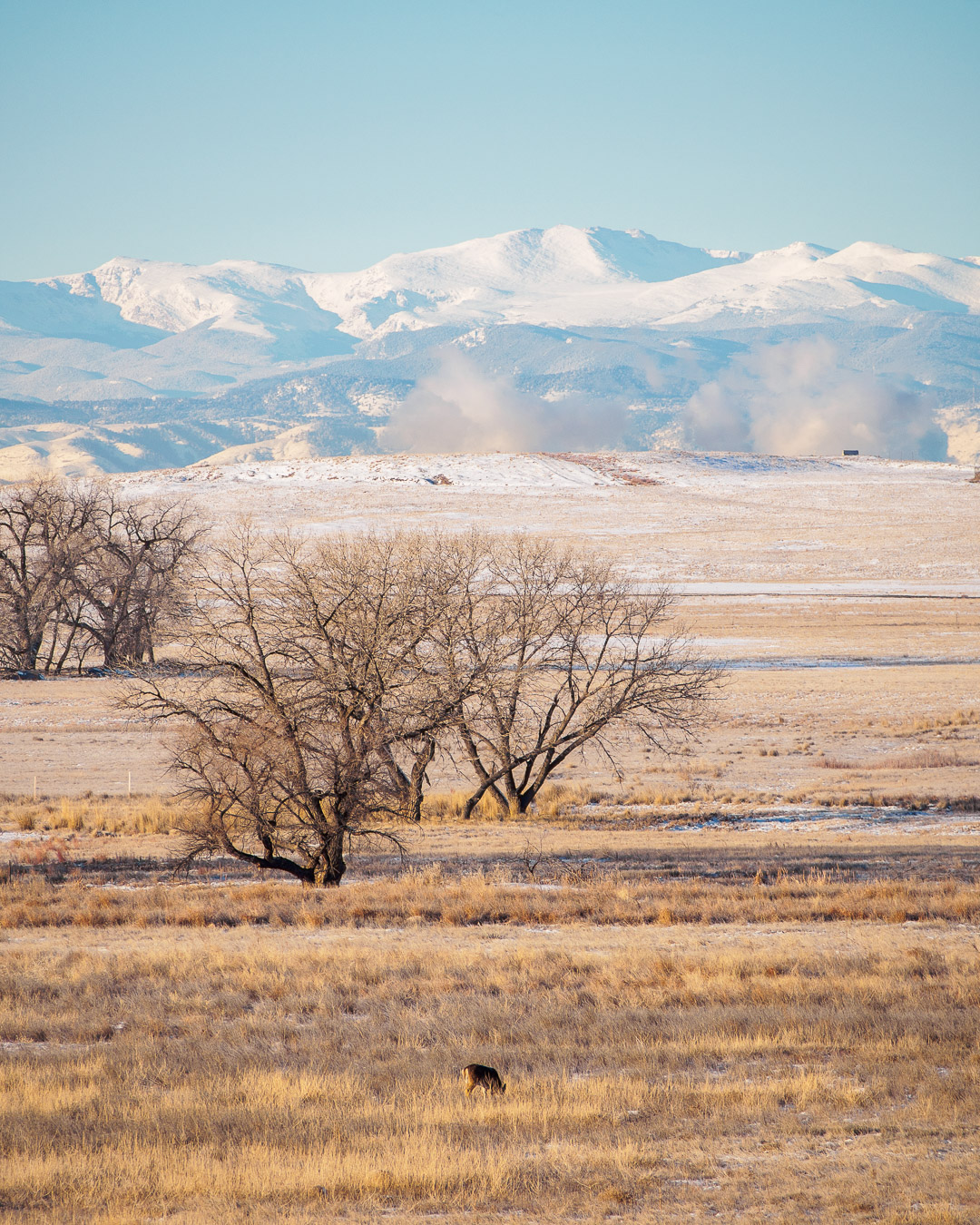 Yes, you still notice the factories and industrial zones if you look for them. You’re still within the Denver Metro area after all, and Commerce City is named for its ambitious industry. The fence surrounding the park is unsightly, and Dick’s Sporting Goods Park on your way to the entrance betrays the natural feel that one expects from an area called a wildlife refuge. My preemptive conclusions were washed away soon after entering the park, and I realized I had been missing out not making my way out there earlier. The refuge boasts only 350,000 visitors since its inception. Put it up against something like Rocky Mountain National Park which receives 500,000 visitors a month and you soon realize this is a relatively unoccupied gem. And so close to the city! Coasting just beyond the visitor’s center, I made a mental note that this is a space I will have to frequent more often, and is a perfect spot for short-term visitors to tour to get a classic-feeling Western wildlife experience. Whether you want to get away from the bustle of city life, or sit and observe the massive bison, Rocky Mountain Arsenal will deliver in spades. It was such a revelatory experience, I had to tour the 10 mile route twice. I look forward to spring dawns and summer sunsets, and the added cacophony of more birds joining the experience. Oh, and it’s free. 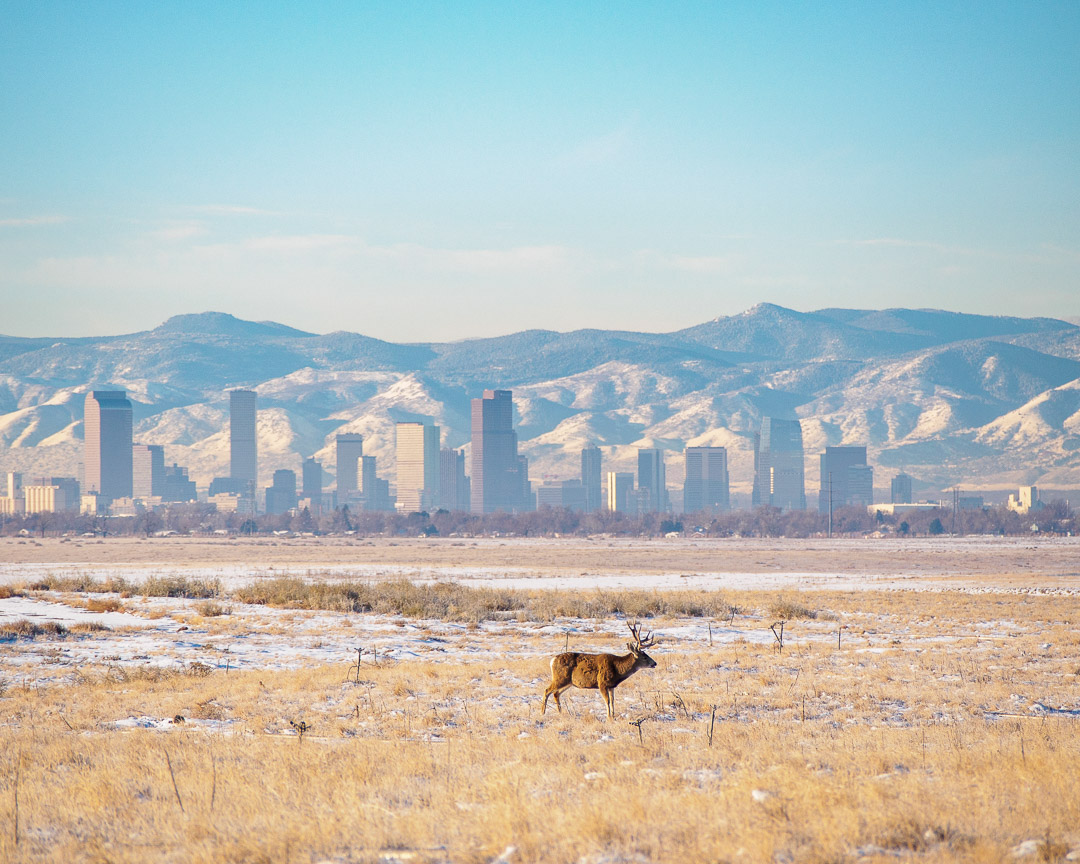 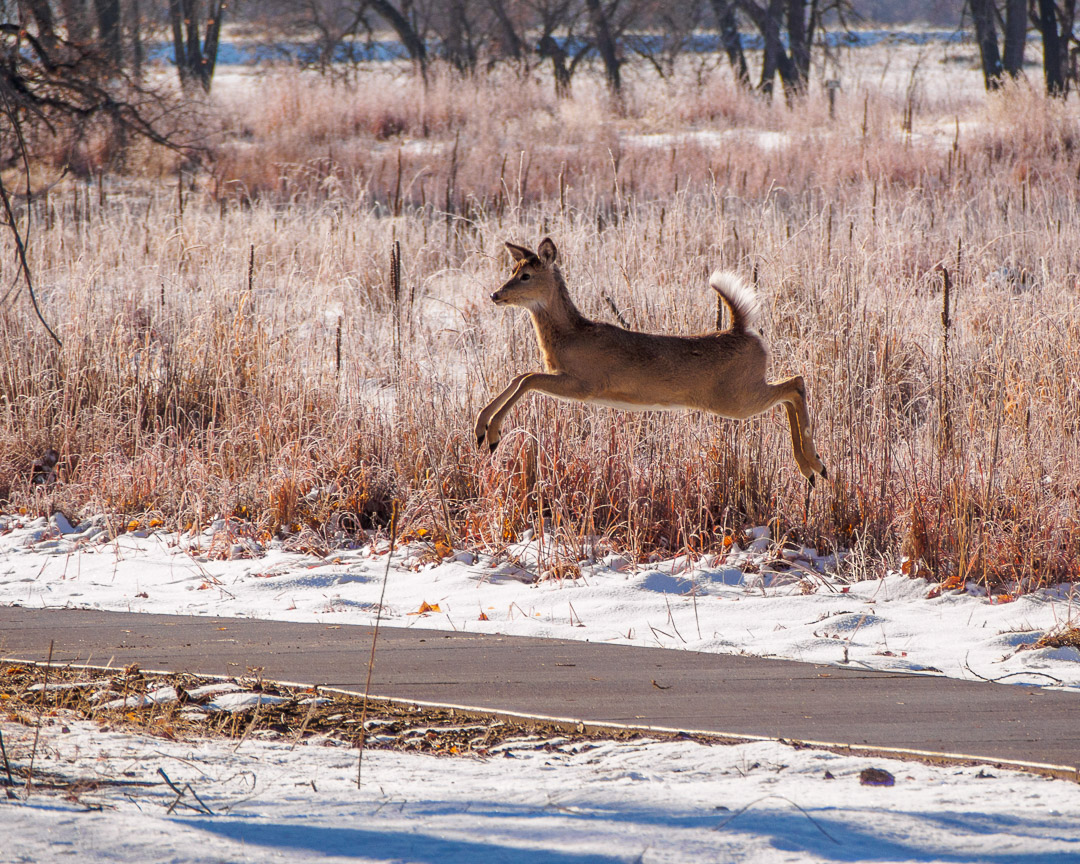