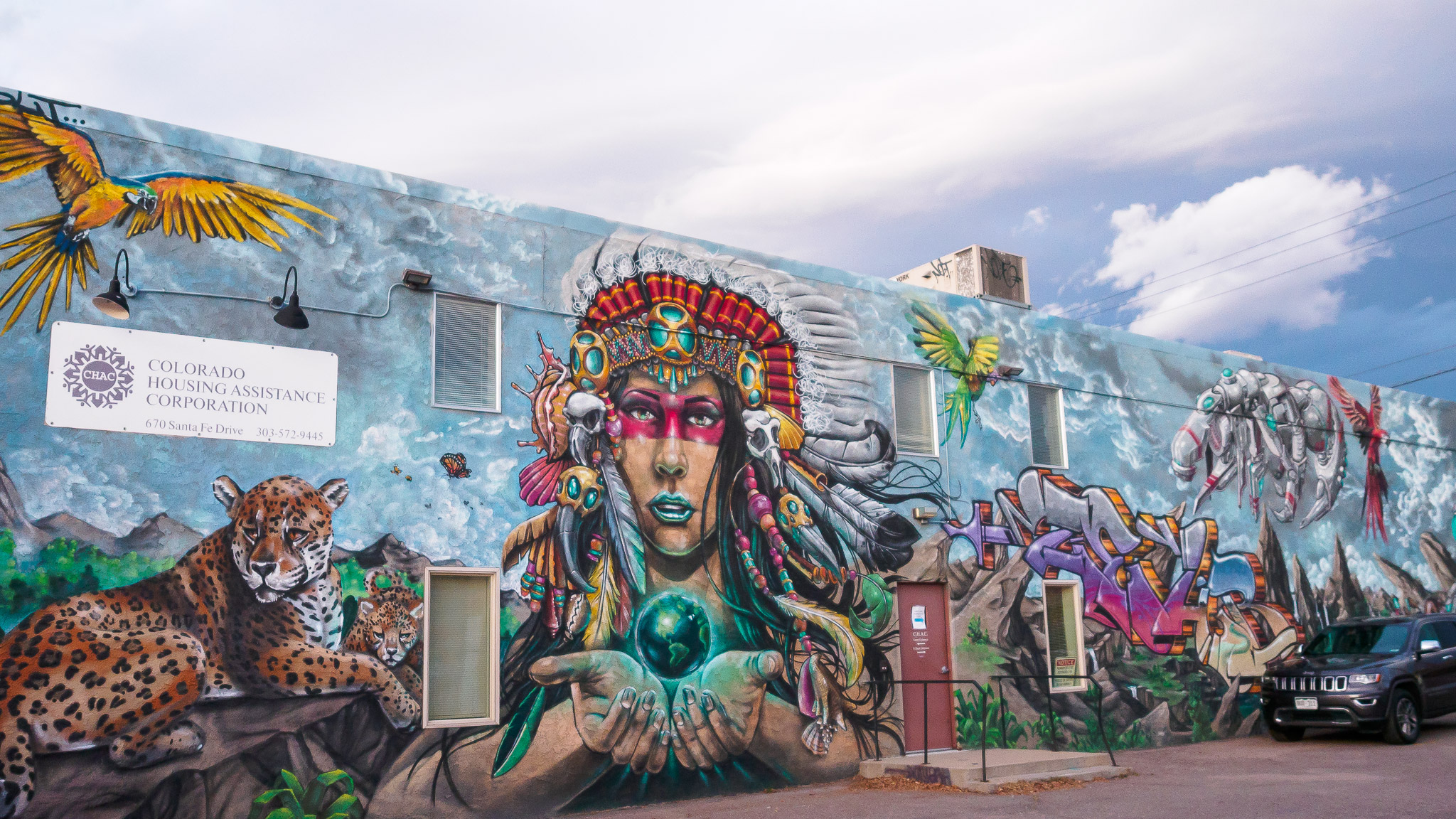 Denver is a city rife with artists and their artwork. Walk along any number of streets or trails and you are bound to come across murals, sculptures, and storefronts full of pieces from locals expressing their creativity. Fear of color is not an option here, as many of them revel in their splashes of bright, rich color from abstract shapes and scenes to more traditional faces and phrases. The Art District on Santa Fe is one of the first certified creative districts in the state. Spanning more than 10 blocks north to south and a few east to west, the neighborhood is traditionally Hispanic and the murals around here reflect that. Alongside galleries you’ll find gyms, breweries, and restaurants. 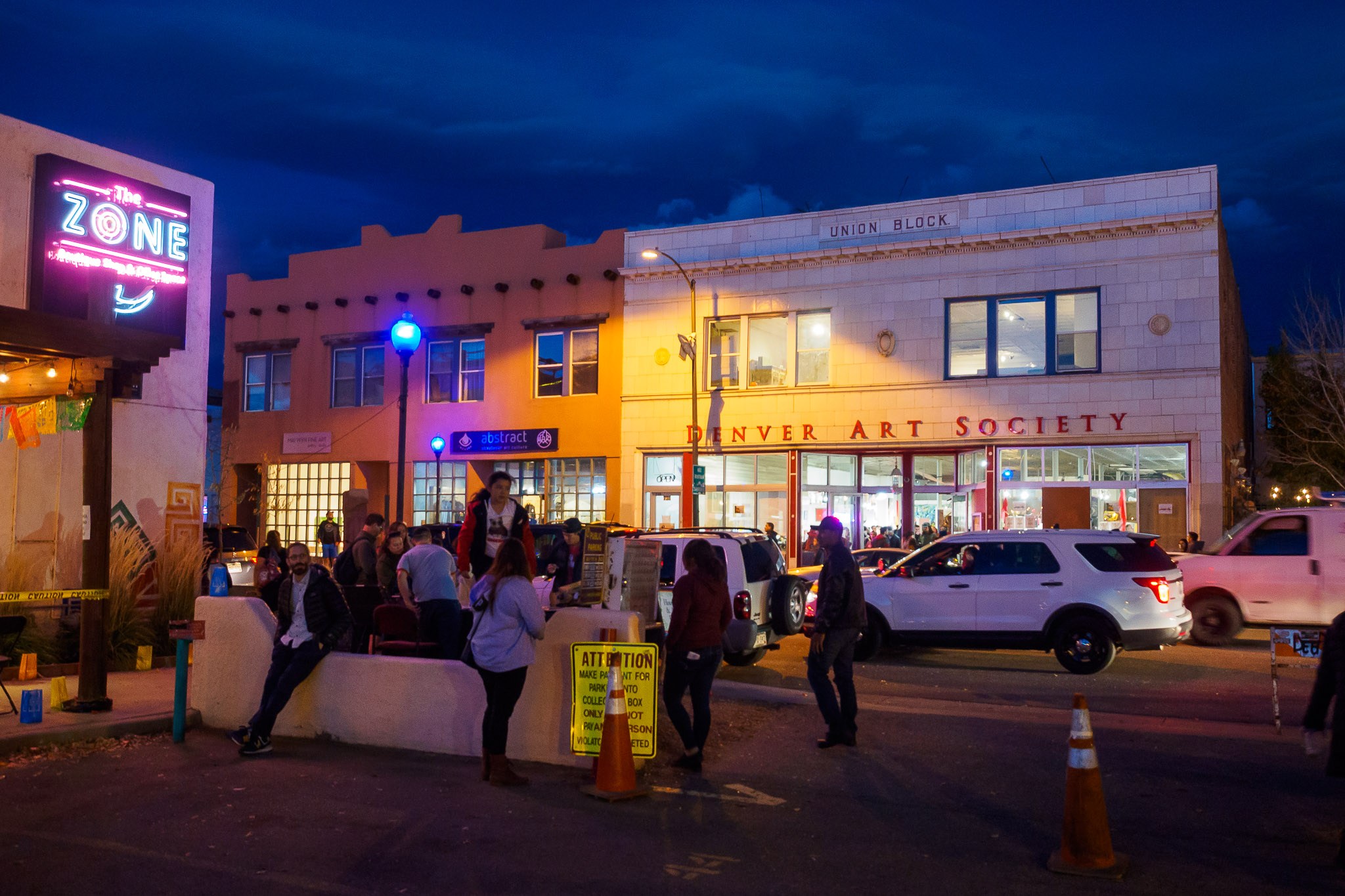 On the first Friday of every month the district citizens open their galleries and studios to open the minds of denizens who come down to check out the event. One main arcade in the center of the district is packed full of artists displaying their original works for sale. Wine is sold at a stand. Restaurants along Santa Fe are packed to the brim with wait times of up to 2 hours later in the evening. Breweries host people in their gardens. When you drive down here normally the street looks a bit sleepy outside of rush hour. To a non-local like myself, you would be hard pressed to understand how this area transforms into the go-to destination to mingle with artists and people of like minds and spirits here to enjoy the show. Once 5pm shows up on the first Friday of the month, however, the street comes alive. 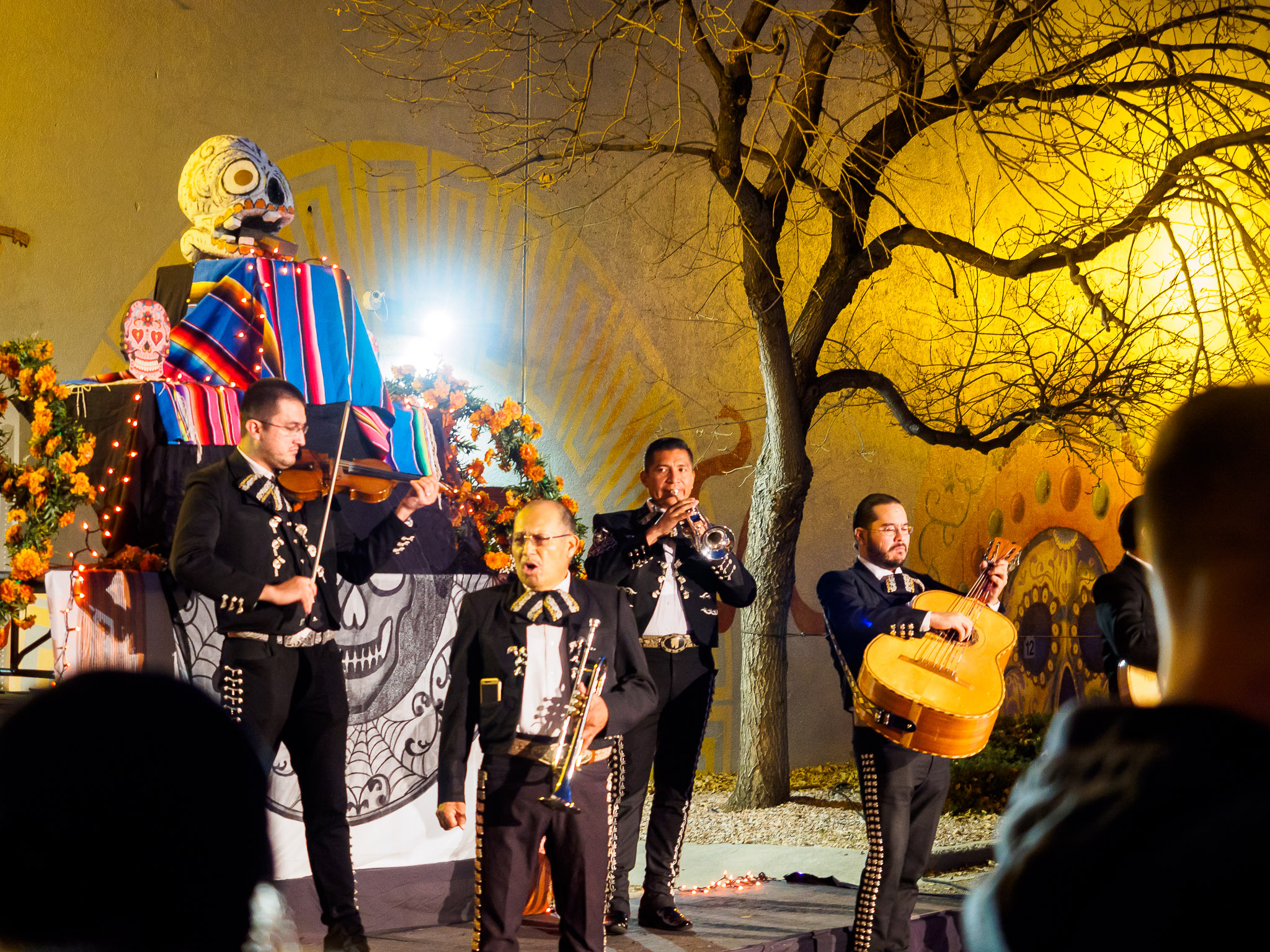 This November, the First Friday Art Walk coincided with a holiday near and dear to Mexicans and many others in Latin America. Día de los Muertos (Day of the Dead) occurs on November 2nd. For those unfamiliar with it, it can be easy to mistake it for a Mexican version of Halloween that we celebrate here in the United States. It is not. Sure, you will find skulls in each holiday and other depictions of the dead. Where Halloween has its roots more closely aligned with a harvest festival and remembrance day of saints and martyrs, it has become a far more commercial holiday where revelers get to dress up as whatever they want and seek out parties in costume. Heck, I was Bob Ross this year. The Day of the Dead is far more aligned with rituals and symbolism. A tradition started thousands of years ago by the Aztecs, the Day of the Dead celebrates the belief that the dead are still a part of our living realm. There was no need to continue the mourning of someone who had passed, for they were still a part of your life here in spirit. 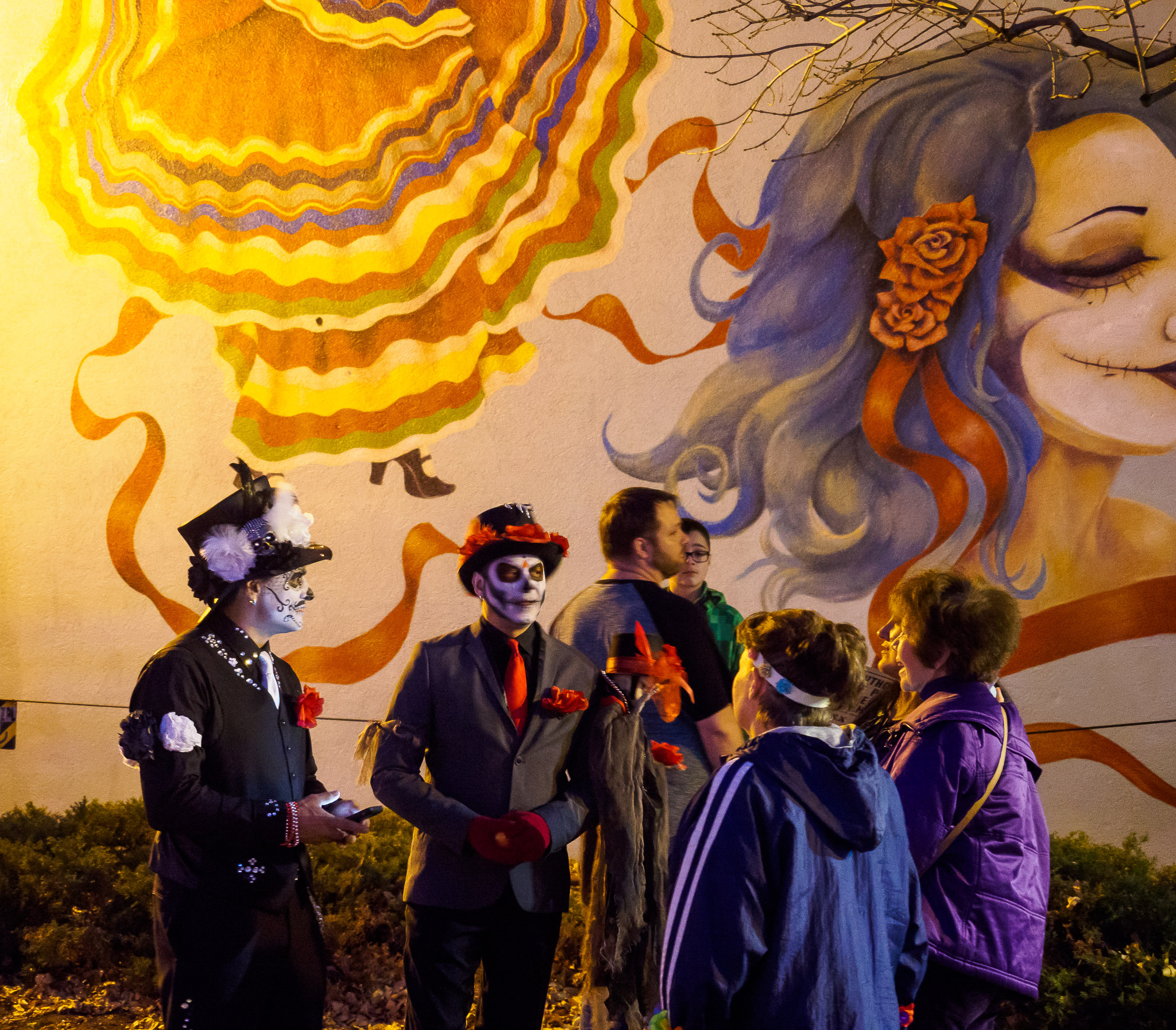 Tonight’s First Friday Art Walk honored this tradition. People of all ages, of varying cultures, had their faces painted in the calavera Catrina style. Many others wore the traditional clothing of the holiday; from frilled, flowing skirts and paisley blouses to fitted black suits donned with silver and gold embroidery. A band played Mexican folk tunes, an altar set up in front of them to honor the dead among them. Adults and children alike dance together. Vendors hand out tastings of beer, and a man serves up a cloud of grilled smoke to passersby from the taco meat he prepares, those in line salivating for their turn. 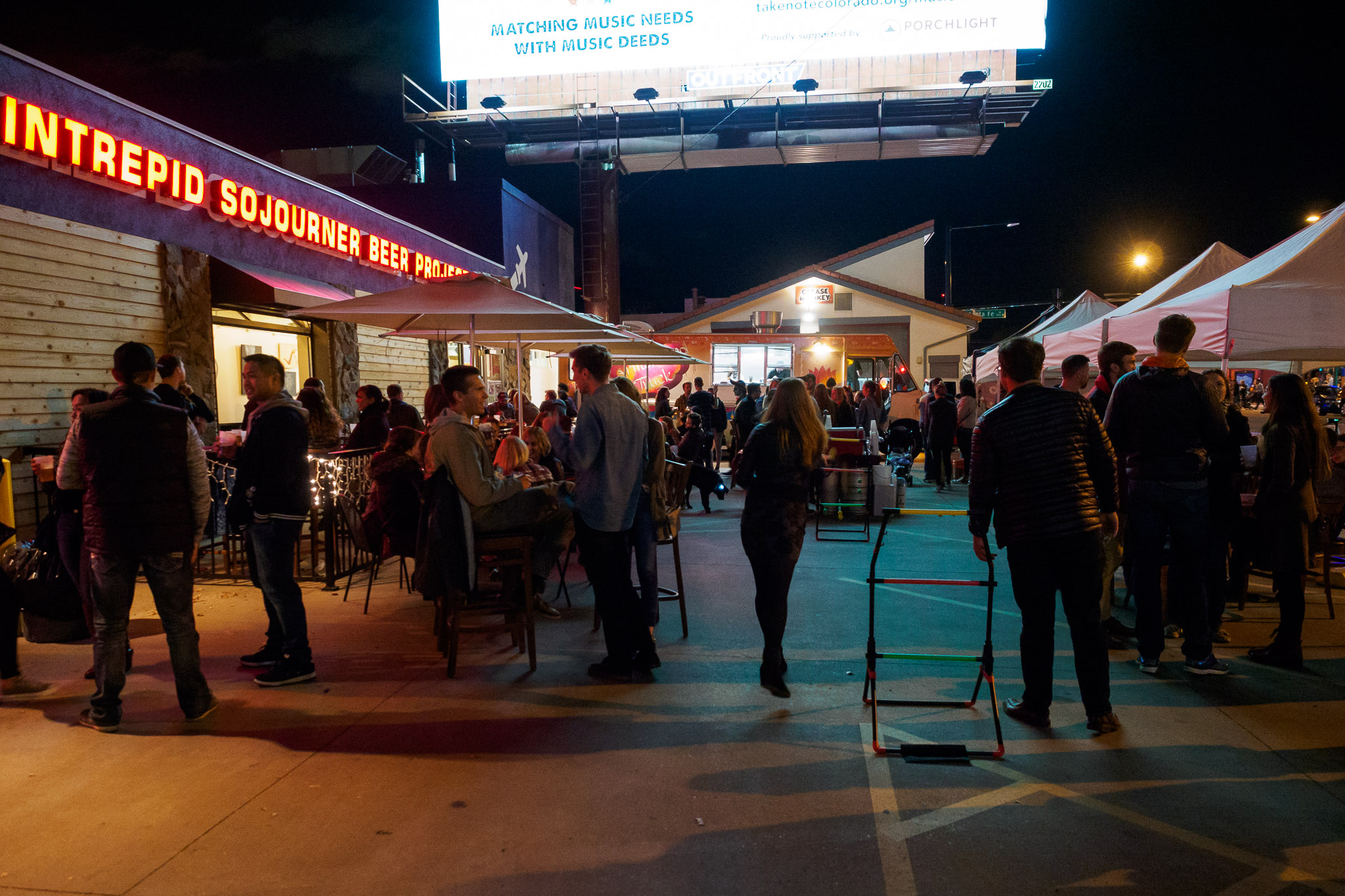 Early in the evening, my eyes had turned away from any galleries in the area to focus on the celebration at hand. Friday art walks are held every month. This is done once a year. To be in the presence of true revelry of the holiday was a first for me. Sure, we’d celebrated it in school a few times that I could remember, but this was different. The spirit of the day was in the air. By 7pm, Santa Fe was closed for a few blocks to host a parade which lead from the north end near 13th street down to the Museo de las Americas, a museum featuring Latin art and culture. The parade was short. Lead by a man carrying a depiction of a giant bird, crowds gathered around the street to observe the party. We were all shoulder to shoulder trying to catch a glimpse of the people and their costumes. At one point, a portion of the parade stopped in front of us. Children, painted skulls and all, danced and twirled to the music playing next to them. Adults cheered them on from the sideline, some calling out traditional whoops and hollers that one usually hears at cultural dances. However different it might seem on the surface, the vibe is similar to dances from my own traditional heritage. After the children dance into the museum, a young couple takes their place and performs a slow, artful dance. Once the revelers are all in the museum, the show is over. The streets are reopened, and it’s back to the art walk. 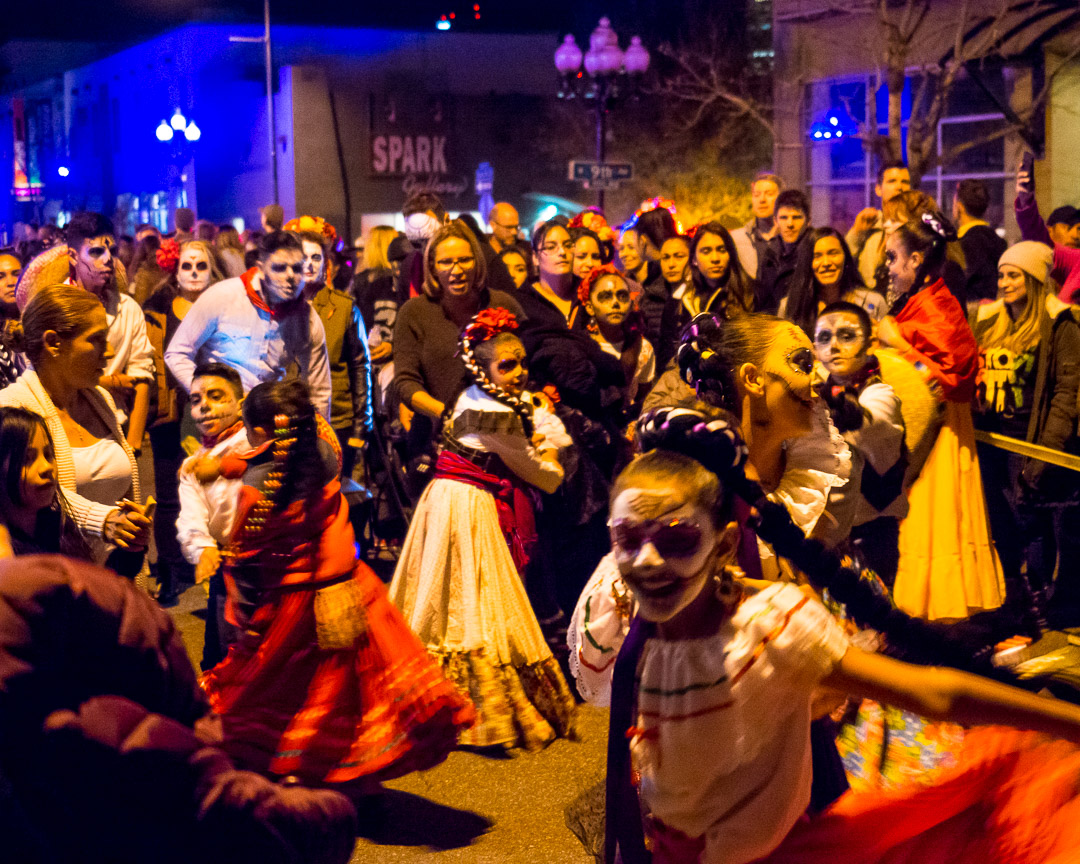 I wish I had prepared more before this experience; known a bit more about what was going on and where to be. While the art walk has its special place as a destination for sharing and experiencing the works of artisans, I could not shake the feeling of the night as being one for the Day of the Dead. I wanted to learn about the ancestors of the people around me. I wanted to hear their stories, what made them laugh and smile. Which meals did they enjoy most? What did they want to tell them now? We often speak about how our diversity in the United States makes us stronger, unique in ways other countries are only beginning to realize. Some people still question it, wonder why we should embrace this diversity. To those, I implore you to spend some time among cultures not your own. Immerse yourself even for a moment in it, and recognize the beautiful differences in humans that connect us more than divide. 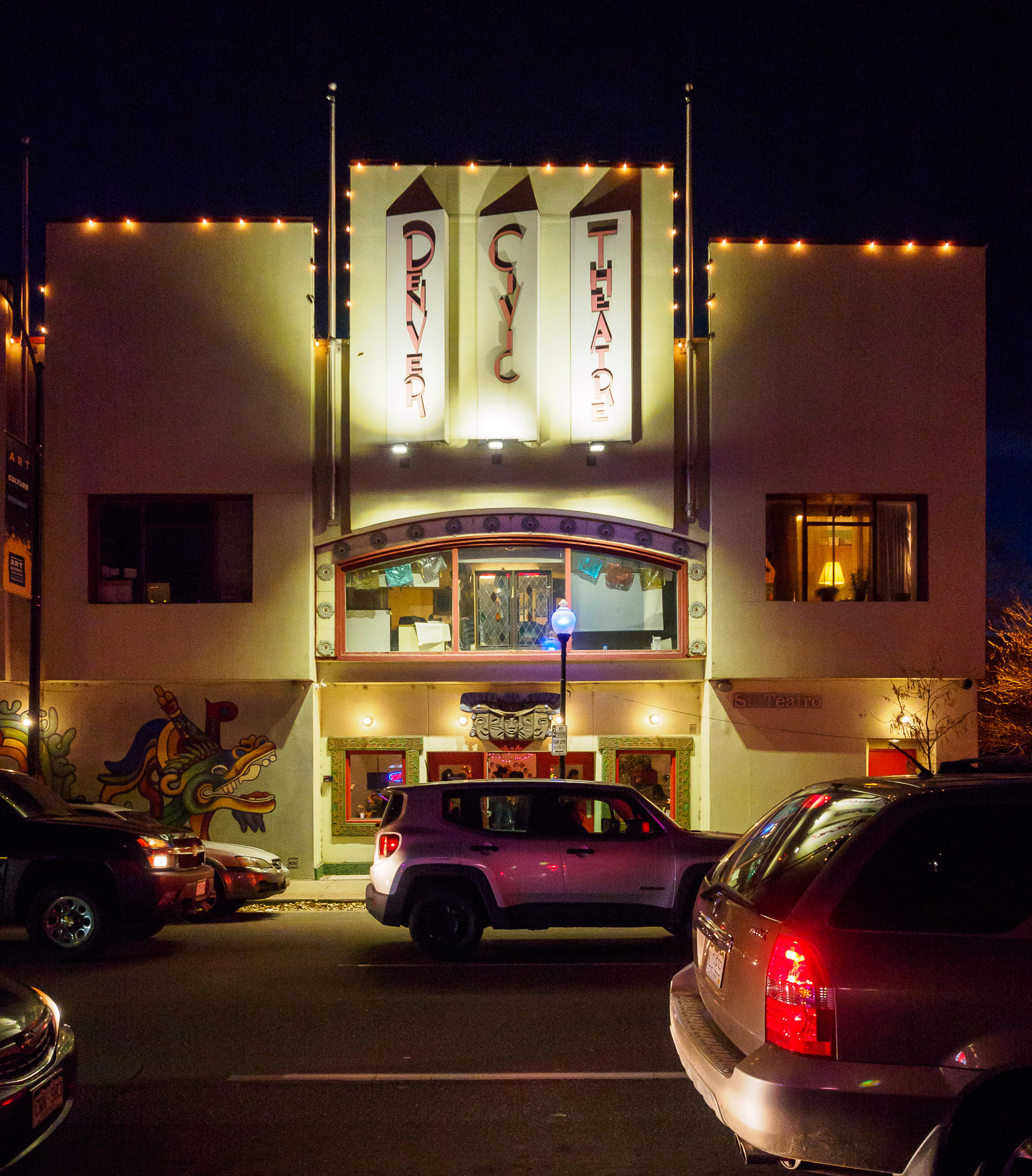 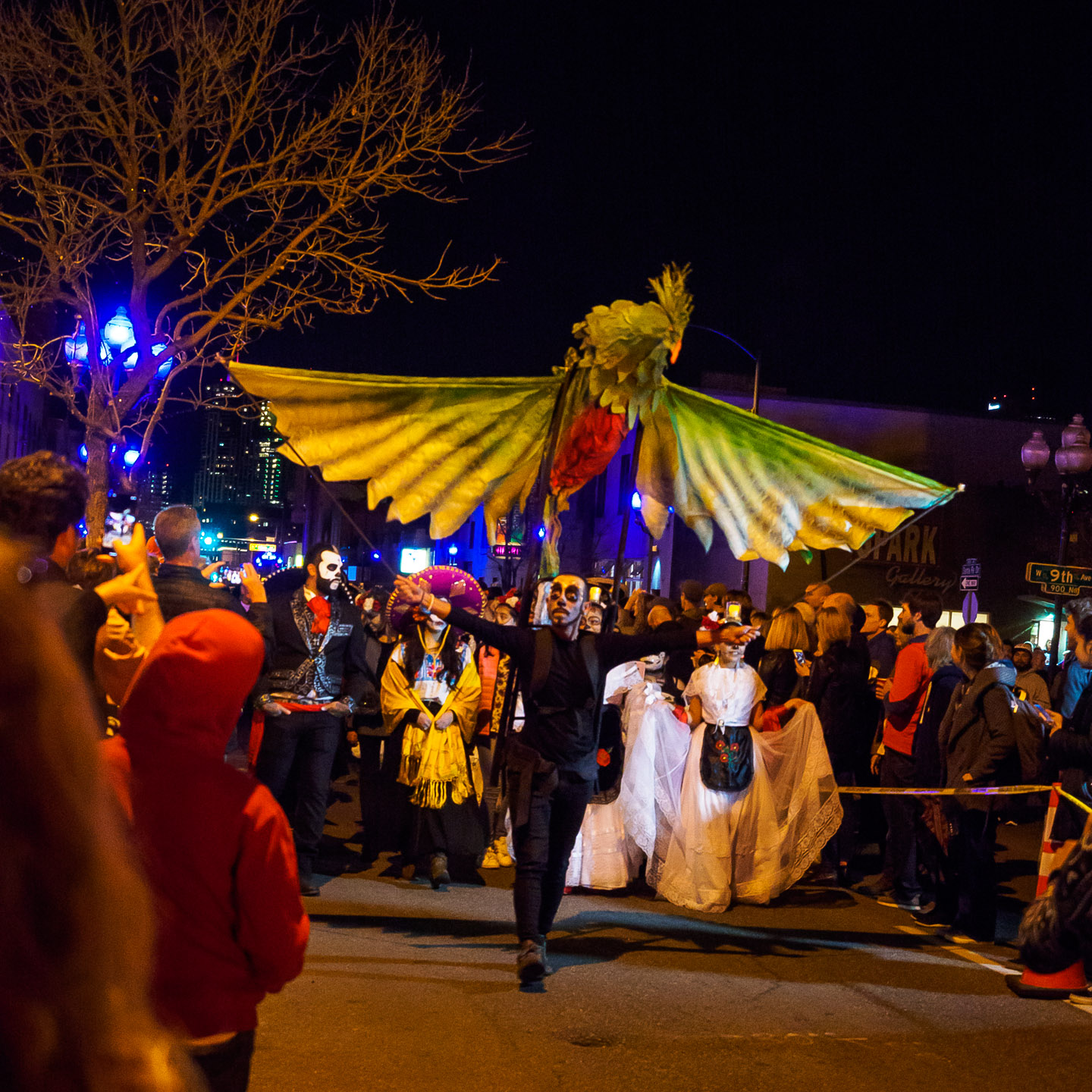 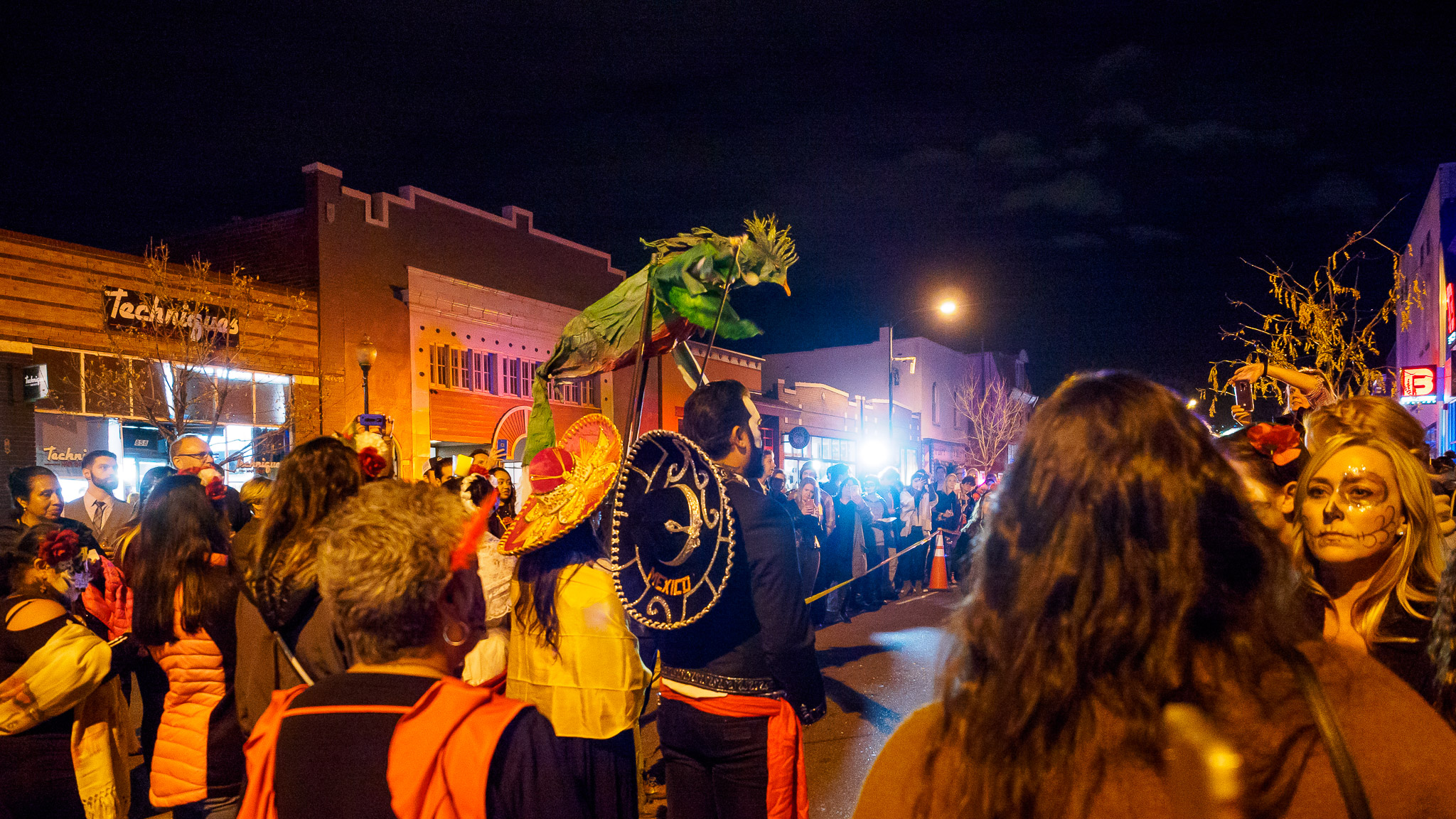 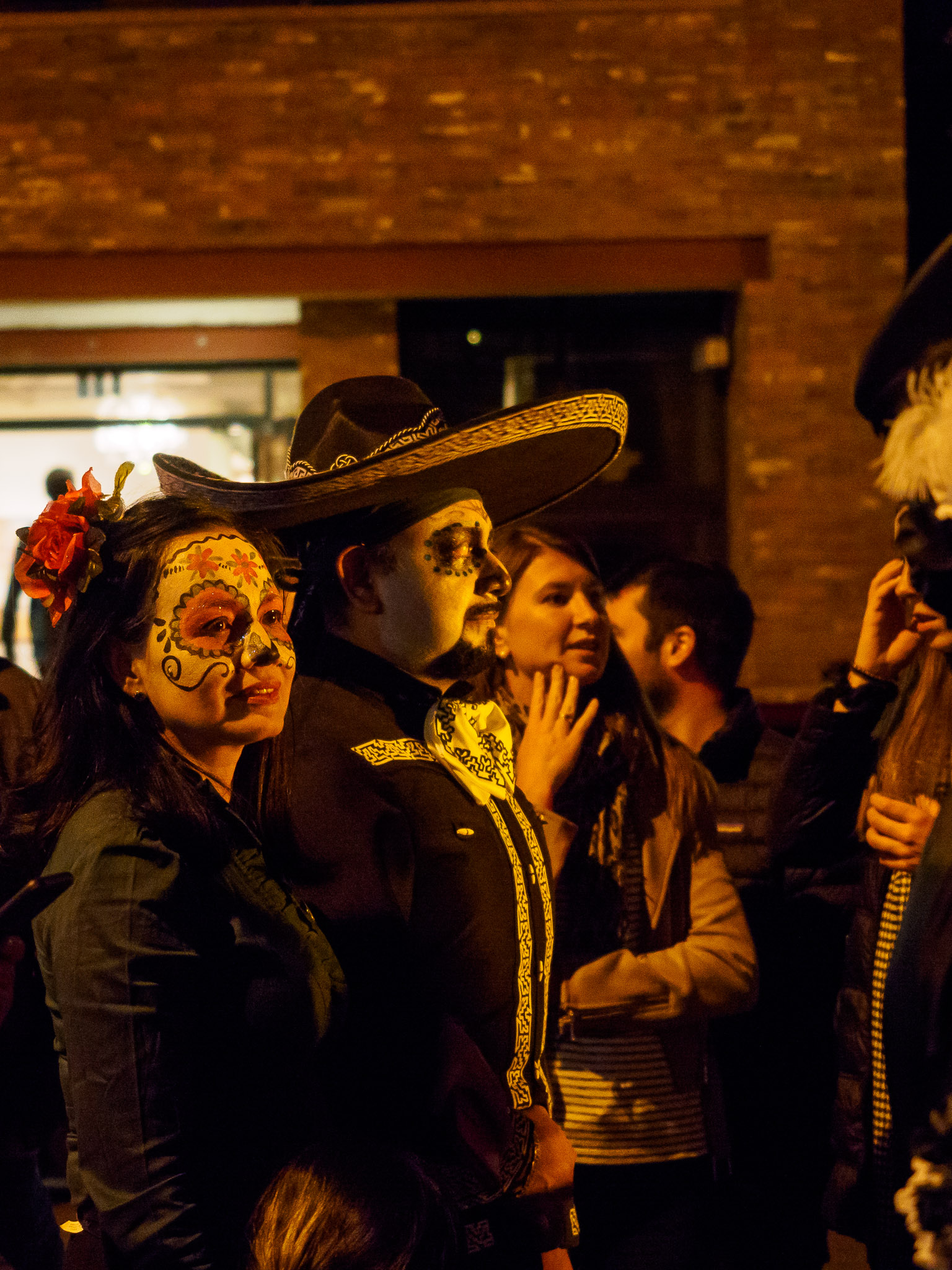 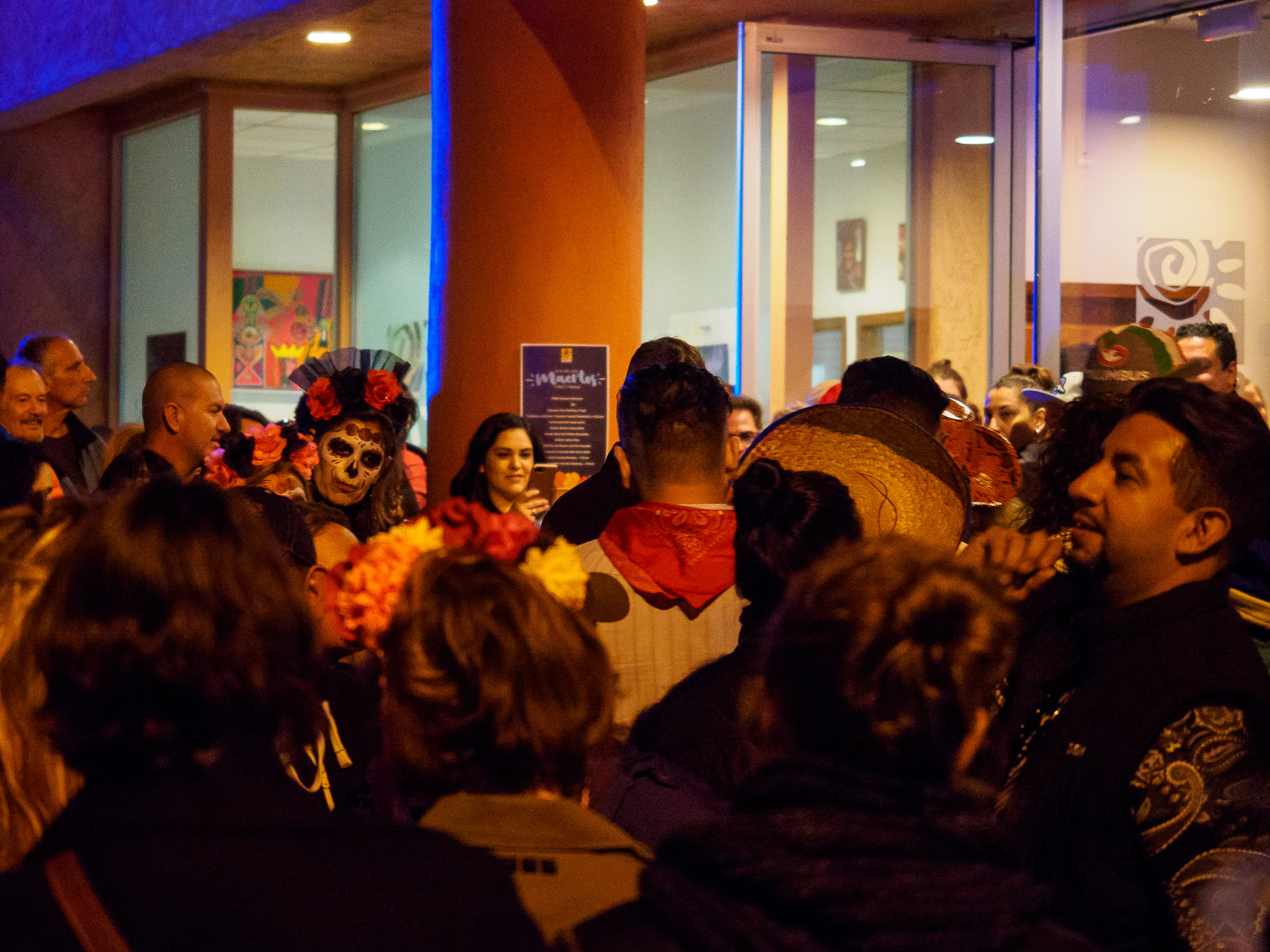 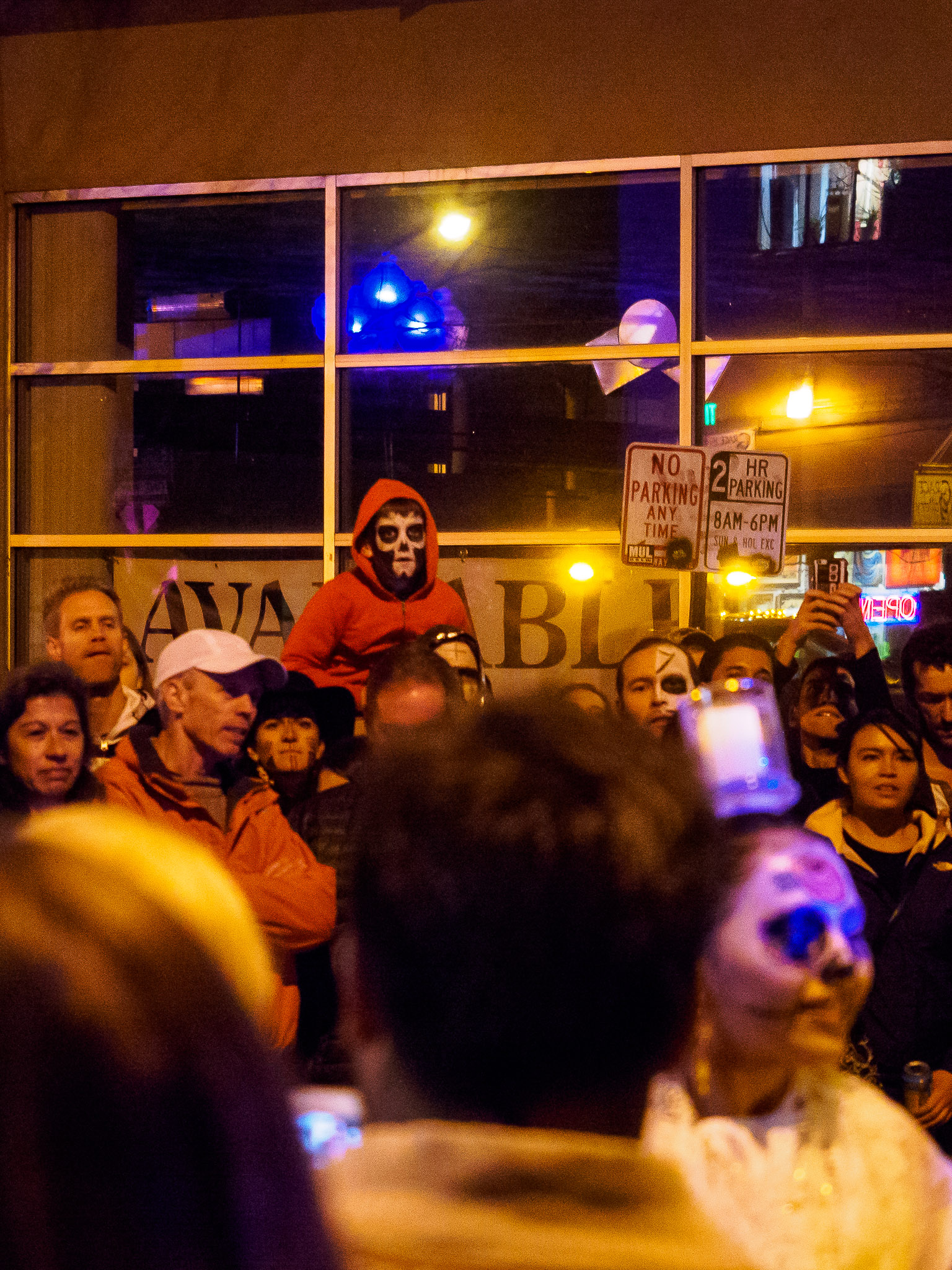 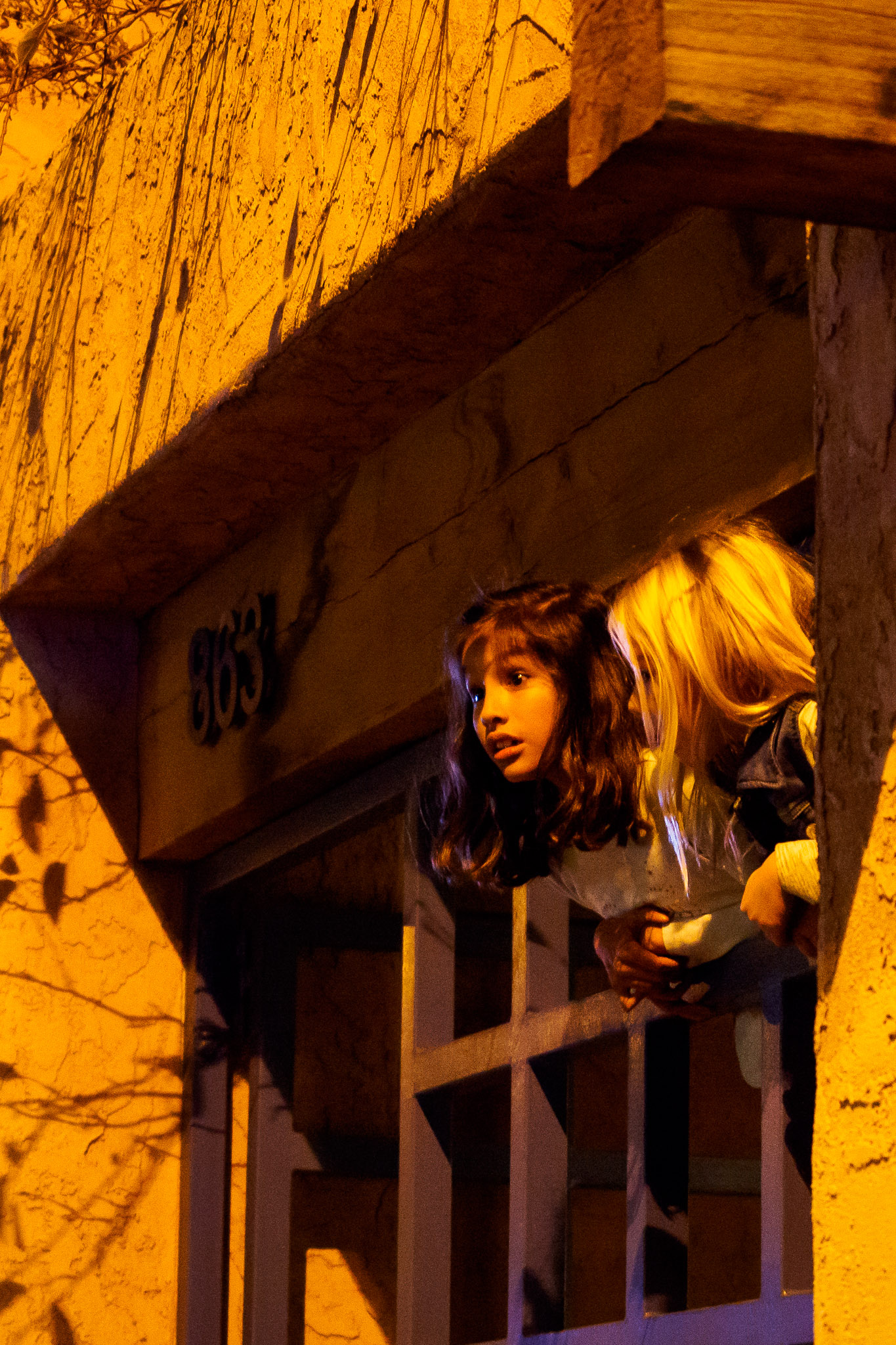 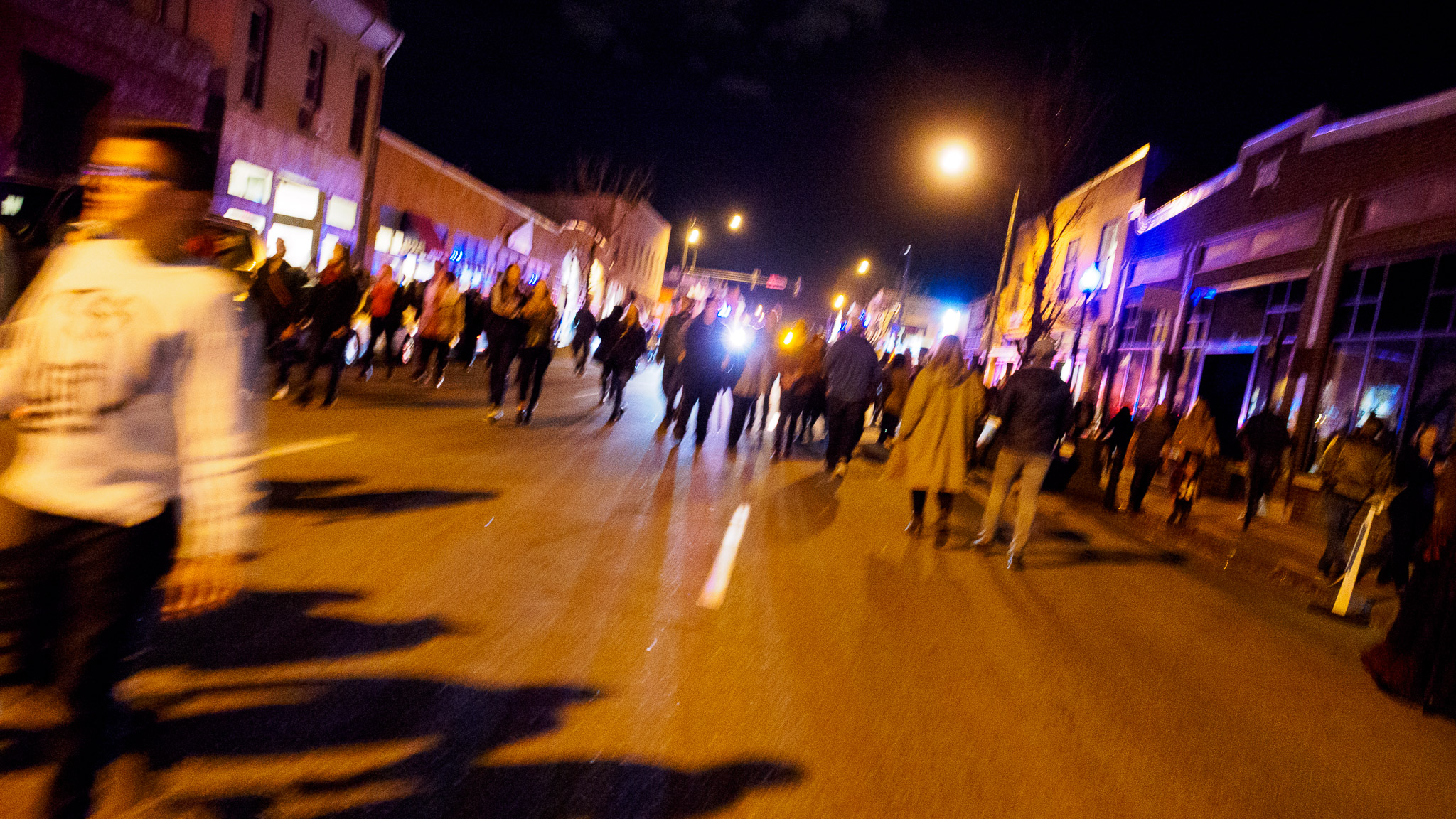